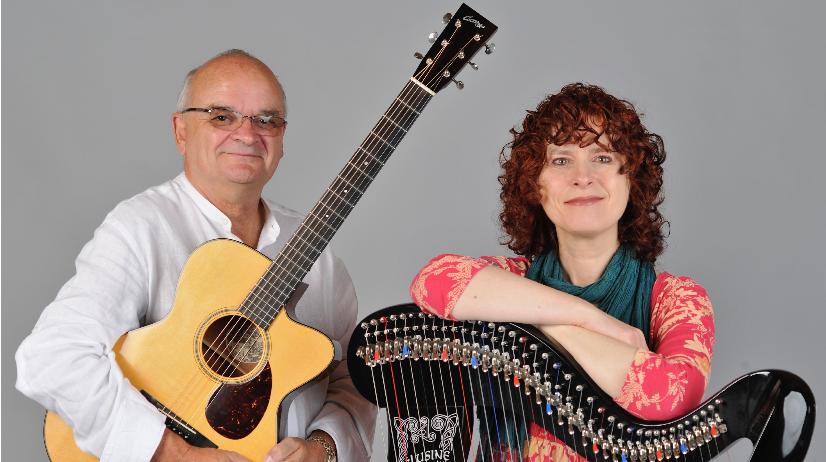 “One of the UK’s most staggering and influential acoustic guitarists” (fROOTS) in concert with “the doyenne of Irish harpers” (SCOTLAND ON SUNDAY) and 2001 recipient of the prestigious Irish Traditional Musician of the Year Award (Gradam Ceoil TG4). Watch Máire's performance with Chris at the Gradam Ceoil TG4 awards ceremony here.

“An eclecticism and spirit of adventure that is quite thrilling” * * * THE TIMES “Dazzling virtuosity” THE DAILY TELEGRAPH “Chris is amazing... one of our greatest musicians” BBC RADIO 2 “In a class of their own” * * * THE GUARDIAN “Music of fire and brilliance from the high-wire act in traditional music” * * * * THE IRISH TIMES "Sublime" SYDNEY MORNING HERALD ”Brilliant, innovative harping and guitar-playing of astonishing virtuosity and versatility” * * * * SONGLINES “This celebrated duo took the place by storm. Stately Carolan tunes, jazzy Django-ish numbers, dazzling Doc Watson style flat picking fliers, driving Irish dance tunes - this pair can nonchalantly do the lot. Guitar players applauded and went sadly home to burn their instruments!” THE BELFAST TELEGRAPH

An interview with Máire was published in The Irish News, Belfast's daily newspaper, on 22 July, 2022, prior to her appearance at the Belfast Tradfest.

Another interview with Máire was published the The Echo, Cork's daily newspaper, on 14 September, 2022, prior to her 30 September concert with Chris at the Cork Folk Festival. 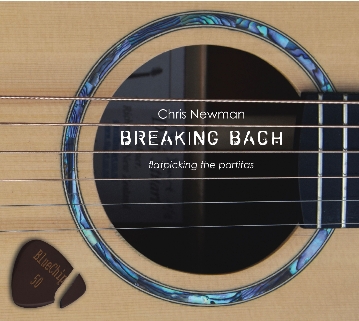 * * * * THE SCOTSMAN * * * * * FOLK WALES
* * * * RnR MAGAZINE * * * * SPIRAL EARTH
* * * * 5PLANÈTES
Chris's new solo album of his arrangements for steel-strung flatpicked guitar of sonatas and partitas written by JS Bach for solo instruments was released on July 23, 2021 and is available both in CD and download format from a number of retailers, on iTunes, and of course directly from us on our Old Bridge Music website!

The project is quite ground-breaking - a recording of this music on steel-strung flatpicked guitar has not been attempted until now.

Review extracts are below; further information and full reviews are here.

Have a listen to some extracts from the album on this sampler - or on iTunes! 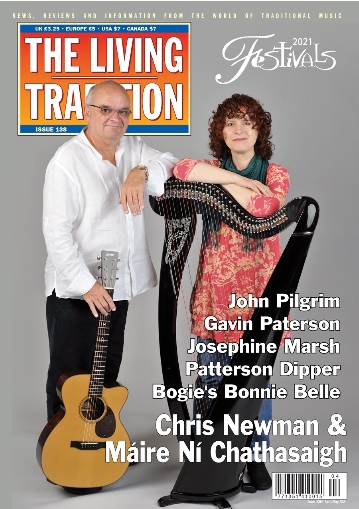 Chris and Máire on the front cover of the April / May 2021 issue of The Living Tradition magazine!

The magazine features an interview with them too. Click here to read it! 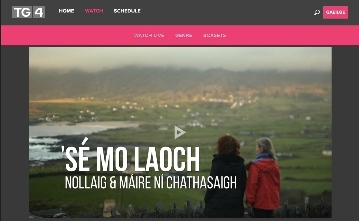 A documentary about Máire and her sister Nollaig (also featuring their sister Mairéad, together with Chris, and Nollaig's late husband Arty McGlynn) was originally broadcast on TG4 on November 29th, 2020, and re-broadcast 13 February, 2022, as part of its 'Sé mo Laoch series. (TG4 is Ireland's national Irish-language TV station.) You can watch it on the TG4 Player here.

You don't need to speak Irish to enjoy watching the programme: just remember to enable the subtitles. When you click on the link above, you'll see three buttons at the bottom of the picture on the right hand side. The first is 'Subtitles', the second is 'Picture-in-Picture' and the third is 'Fullscreen'. Just click on the 'Subtitles' button and choose "English".

The programme was Critics's Choice in the Sunday Times Culture Magazine on November 29th, 2020.

THE LIVING TRADITION August / September, 2021
"Groundbreaking - a magnificent tour-de-force... The elegance and refinement of Chris’s playing artfully conceal the seamless technique and effort expended, and the whole exercise sounds as natural as breathing... Chris’s stylish, supremely skilled fretwork is irresistible, with its swing in the step and rhythmic buoyancy... A toweringly impressive achievement... Outstanding."

* * * * SPIRAL EARTH
"Twelve tracks sweep by in unplugged splendour... Chris Newman is in a class of his own."

Breaking Bach featured on NPR's 'Thistle and Shamrock" radio programme
We were delighted that NPR's hugely-influential "Thistle and Shamrock" radio programme (syndicated nationwide in the USA) featured Chris’s new solo album Breaking Bach on November 24, 2021. The programme led off with Track 1 and a total of 4 tracks were played (1) Violin sonata #3 - top of programme 2) Flute partita sarabande - 19:00 3) Flute partita boure anglaise - 22:13 4) Cello suite #1 gigue - 30.08), so if you would like to listen to four whole tracks from the album, click the link!

Listen to Chris being interviewed about the CD:
Chris was interviewed about the new album by presenter John Toal on BBC Radio Ulster's "Classical Connections" programme, broadcast on Sunday Sepember 5th. (The programme can be heard online on catch-up for up to 30 days after broadcast and is also accessible from anywhere in the world via BBC Sounds.)

Watch Chris being interviewed about the CD:
Chris and English mandolin ace Simon Mayor have known each other for a very long time, and over the years they’ve played on each other’s recordings and even done live stuff together from time to time, but never done this before – a YouTube interview on the steps of Simon's house in Reading!

Have a listen to some extracts from the album on this sampler - or on iTunes!

An interview with Chris appears in the January - February 2022 issue of RnR Magazine!

In it he discusses his new solo album, Breaking Bach, and his musical journey.

The magazine is available in all major UK newsagents. Here is their introduction to their New Year newsletter (which you can read in full here):

"It has been wonderful to get back to live performances and we have enjoyed every minute of our busy autumn - concerts in Ireland, the UK & Italy, festivals in Ireland, the USA and the UK, and a 15-date Celtic Christmas Strings tour which we finished just before Christmas (details here)! It was such a treat to have been able to tour and meet so many people again after the dark days of the pandemic. 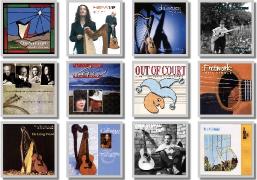 Listen to them play 'Reel for a Water Diviner' (composed by Máire) from their CD FireWire:

Listen to them play 'A Sore Point' (composed by Chris) from their live CD Live in the Highlands:

Listen to them play 'Stroll On' (composed by Chris) from their live CD Live in the Highlands:

A TV programme celebrating the late legendary Irish accordeon-player Joe Burke, featuring lots of wonderful musicians and to which Máire was honoured to be asked to contribute, was broadcast on TG4 on Christmas Day 2021.

You can still watch the whole programme on the TG4 Player here. Some archive footage of Máire playing with Joe in 1983 starts at 22:14, followed at at 23:49 by new specially-recorded footage of her playing her arrangement of iconic slow air 'Róisín Dubh'.

TG4 is Ireland's national Irish-language TV station. However, you don't need to speak Irish to enjoy watching the programme: just remember to enable the subtitles. When you click on the link above, you'll see three buttons at the bottom of the picture on the right hand side. The first is 'Subtitles', the second is 'Picture-in-Picture' and the third is 'Fullscreen'. Just click on the 'Subtitles' button and choose "English". 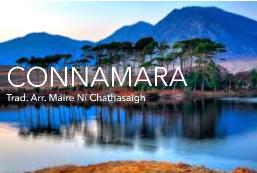 Máire's arrangements of "Don Oíche Úd i mBeithil' (newly available for Christmas 2021), 'Molly St George', 'Connamara', 'The Lost Summer', 'Lady Gethin', and 'The Song of the Harp' (the latter two available for both solo harp and harp duet) are now downloadable from here, as are her booksThe Irish Harper Vols I and II, and Chris'guitar book Adventures with a Flatpick. (All books also available in hard copy.)

Of course he has now recorded a whole CD of Bach's music, but it doesn't include these three pieces!

Saturday October 16th 2021 was Harp Day, the amazing annual international event coordinated by Harp Ireland. The final concert of the day, HARPS FROM ALL CORNERS, culminated with Chris and Máire's contribution.
Watch it here. (Their set starts at 2:40:48 and to watch that only, click here.) 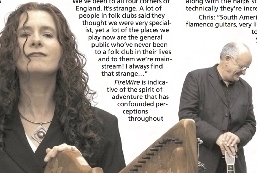