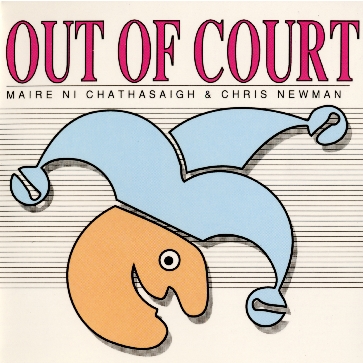 "a stunning array of techniques and moods"

"one of the most refreshingly
innovative releases in recent years"

"an excellent mix of frivolous and
more heavyweight material"

About Out of Court...

In 1991, Máire and Chris released Out of Court (their third album together), an effervescent mixture of baroque-influenced Carolan, straight-down-the-line Irish dance music, haunting songs and a 17th century air from the ancient Irish harp tradition, interspersed with original comositions which exhibit some dazzling jazz-influenced pyrotechnics. They're joined by a stunning selection of star guests: legendary uilleann piper Liam O'Flynn; Máire's gifted fiddle-playing sisters Nollaig, who has been a member of bands as diverse as Planxty, Coolfin and the RTÉ Symphony Orchestra and whose virtuosity, versatility & lyricism are displayed throughout the album, and Mairéad, whose distinctive, subtle & very traditional style is featured on one track, "Frieze Britches"; bass player Danny Thompson, renowned in jazz and other music circles and known to folk music fans since his early days with Pentangle; and mandolin maestro Simon Mayor.

Tracklisting for Out of Court

FOLK ROOTS (England)
"Displays a stunning array of techniques and moods and some supreme musicianship in performance and arrangement. The scintillating jazz-influenced title track opens the album in fine fettle... Nollaig, Liam and Danny provide impeccable backing for one of the most haunting tracks Will You Meet Me Tonight on the Shore? But it's Máire and Chris's own expertise on their particular instruments together, ensemble, and solo that are rightfully allowed to dominate the feel of the record. Máire's exquisite solo rendition of the air The Wild Geese and Chris's solo performance of a self-composed jig and a Scott Skinner reel blend in smoothly amongst the ensemble tracks to complete one of the most refreshingly innovative releases in recent years."

TAPLAS (Wales)
"An album of sheer delight... Máire's mission is to prove that the harp is far more versatile than commonly believed. Few can rival her ability to play so many different styles with equal facility. Just as accomplished, Chris's nimble fingers always make sparks fly and together they're a formidable partnership. They really make this party swing - appropriately, as the title track and Stroll On!, both originals, could be straight from the swing era. The former features a superb fiddle solo from Nollaig Casey and a scintillating burst from Simon Mayor's mandolin...Various styles are sandwiched in between. Particularly impressive dance-tunes are Máire's self-penned slip-jigs The Harper's Chair/The Cherry Blossom and A Sore Point, played by the Chris Newman Trio (i.e., Chris on guitar, mandolin and bass)... Carolan is represented by the elegant Lady Gethin, whose baroquishness contrasts starkly with the majesty of the older The Wild Geese, played as a harp solo. An excellent mix of frivolous and more heavyweight material."

THE DAILY TELEGRAPH (England)
"Gloriously adventurous offering from Máire Ní Chathasaigh, a scholarly Irish harpist, in truly inspired union with Chris Newman, a quirky English master of the acoustic guitar... (It is) of course a showcase for their startling virtuosity; but it adds variety through songs; gloriously adventurous and jazzy sounds from Newman's 1930 Martin guitar; and sterling assistance from Danny Thompson and Simon Mayor among distinguished session musicians."


About Out of Court

Out of Court Tracklisting

Out of Court Tracklisting

About Out of Court