Chris and Máire's most recent duo CD, Christmas Lights, was released in December 2013 - and their associated new Christmas show played to sell-out audiences: “(Their) mastery and magic... produced a rapt response” THE GUARDIAN

They have just (December 23, 2014) finished this year's 21-date Celtic Christmas Strings tour of the UK and had a wonderful time on their travels - eight of the concerts were sold out, which they were thrilled about! (Their special Christmas show featured a selection of carols from Christmas Lights in addition to their regular repertoire of Irish traditional music, bluegrass, swing and original pieces.)

THE LIVING TRADITION
Hot off the press and before you can say “roast chestnuts”, here’s a delightful Christmas-themed offering which fair makes me wonder why this famed musical partnership has taken so long to get round to making a seasonal record (after all, they’ve served up just about every other type of musical feast for us during their illustrious individual and joint careers thus far). Together Máire and Chris provide a satisfyingly original, often refreshingly unpredictable take on festive favourites. But I’d stress that what you don’t get here is a stocking-full of folked-up, jazzed-up and rocked-up-by-numbers carols: instead Máire and Chris deliver a pleasing, rounded sequence of 16 items that balance glittering, quietly virtuoso treatments of trusty and well-trodden carol repertoire with assured and equally respectful versions of a handful of less-often-heard seasonal pieces.  Stylistically, the majority of the carols are taken relatively straight, generally in thoughtfully-arranged acoustic-folk (sometimes with a backbeat, often with a swing) mode, springing no horse-frightening gestures and throwing no curveballs, but instead always entertainingly presented and conceived. Joyful musicianship is guaranteed and while the performances are affectionate and mindful of tradition, there’s no trace of sentimentality and what might sometimes be seen as hoary frosty old tunes emerge from the murk of ages sparkling as baubles on the Christmas tree. Settings are both sensibly paced and economical, with no carol outstaying its welcome (the majority of tracks lasting less than 3½ minutes), plenty of musical interest being packed into each arrangement.  Máire and Chris have both long been known for their unique approach to the music they play, their key combination of confident playfulness and keen adventure. Máire is quite simply one of the finest exponents of the Irish harp, distinctively stylish at all times and in all musical idioms, while Chris is regarded not only as a guitarist’s guitarist, at home in every musical discipline, but also as a consummate producer and arranger (he brings mandolins, bass and keyboard skills to the mix too). Both Máire and Chris share the valuable gift (which cannot be taken as a given amongst the most brilliant musicians) of making the fruits of their technique entirely accessible to the casual or less specialist music-lover as well as to the muso-aficionado, indeed to all levels of listener in between.  Finally I need to mention that the duo’s own instrumental expertise is lovingly augmented here by that of Nollaig Casey (violins) and/or Maggie Boyle (flute), while several of the tracks also enjoy rhythmic embellishment from Roy Whyke, whose drum kit work proves a model of genial restraint and grace while keeping entirely in the playful spirit of Máire and Chris’s own music-making. On each play, additional subtleties and details are revealed within, and I find myself cherrypicking (or should that be holly-picking?) different individual tracks for honourable mention, from the sprightly waltz of The First Tree In The Greenwood to the stately Coventry Carol, the delicate lyricality of Infant Holy to the gorgeous string backing of Il Est Né Le Divin Enfant to the relaxed We Three Kings; the enchantingly folky Do’n Oiche Úd i mBeithil to the rumbustious multi-mannered finale Ding Dong Merrily On High. This uplifting collection will I’m sure quite literally bring comfort and joy, and I feel sure “yule” thoroughly enjoy this disc!

FOLK WALES * * * *
"Here we go again with the seasonal Christmassy CD rush – and whereas the commercial scene is urging you to part with your hard-earned money for whatever festive tat they can offload, be very thankful for the wonderful world of folk, which promises gifts of the highest quality. Chris, who fRoots praised as: “One of the UK’s most staggering and influential acoustic guitarists”, and Máire (“The doyenne of Irish harpers”, according to Scotland On Sunday) invite Máire’s sister, the impressive fiddler Nollaig Casey, flautist Maggie Boyle and drummer Roy Whyle to Old Bridge Music to record the clutch of Christmas carols; and they substitute the voices and verses for dizzying instrumental runs and really masterful playing.

Chris and Máire interpret some well-known carols with not-so-well-known arrangements, such as ‘The Holly And The Ivy’, ‘Three Ships From Sussex’ and ‘God Rest Ye Merry Gentlemen’, while Maggie’s flute is positively dancing in ‘Oh Little Town Of Bethlehem’ and Nollaig contributes some beautiful fiddle as well. However, they choose several unfamiliar and rarely-heard peices, such as the Spanish carol ‘Campana Sobre Campana’, ‘Past Three O’Clock’, ‘Il est Né Le Divin Enfant’, the entrancing and delicate Irish Gaelic carol ‘Do’n Oiche Úd I mBeithil’ (To That Night In Bethlehem) and ‘Infant Holy’. The album ends with the wildly celebratory ‘Ding Dong Merrily On High’; this carol borrows from the smouldering and sexy French dance tune ‘Bransle De L’Officiel’, and Chris and Maire have an absolute ball playing it. This is one Christmas present to be treasured!" 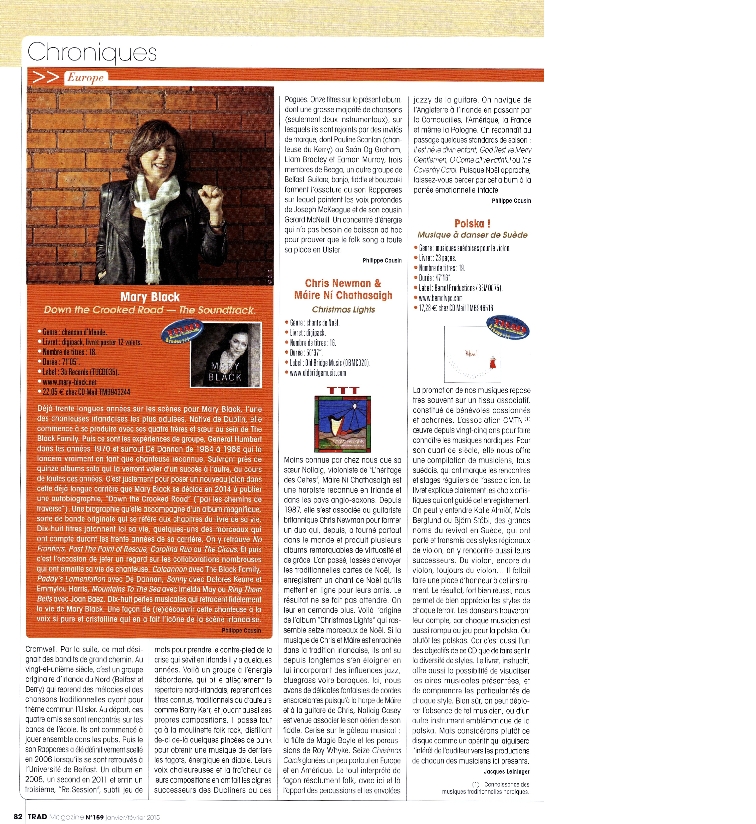 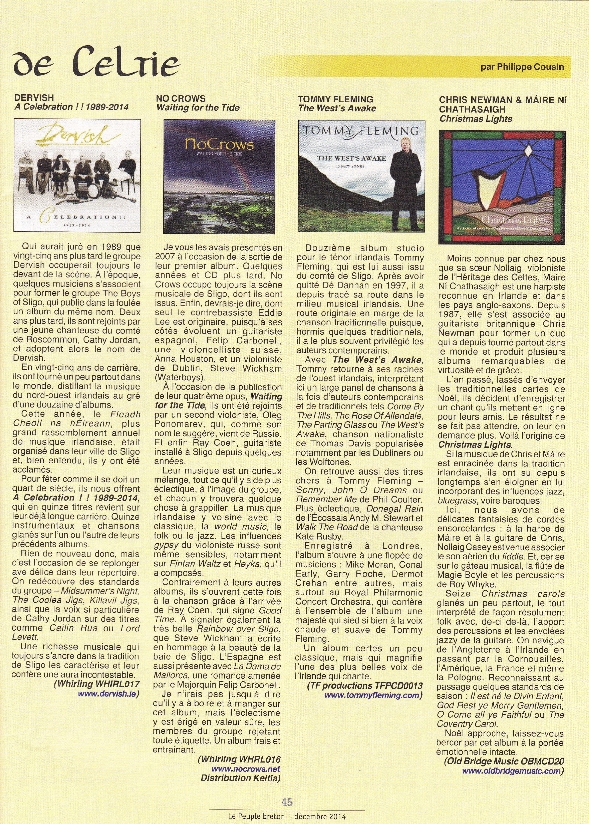 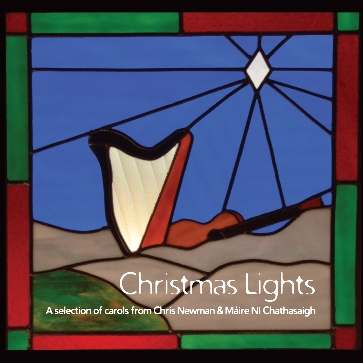 "from the "entrancing and delicate" to the "wildly celebratory"

"this is one Christmas present to be treasured!"